Warning: This post could be triggering to some. I am copying word for word (even with grammatical mistakes and spelling/typing errors from my IG page.) Sorry, but maybe that will help my opinions come off as they truly are… an average American middle class white woman educating myself on topics that I honestly had to wake up to. It’s hard. It hurts and as always I promise to reflect from my self-proclaimed flawsome empath view. Therefore, I’m opening myself up to the internet’s dumb comments and judgements in hopes of spreading awareness about my own awakenings regarding topics that effect my life. Below is my thoughts on Amy Schumer’s most recent IG post calling out white NFL players for not kneeling next to their protesting brothers.Please see copies below. 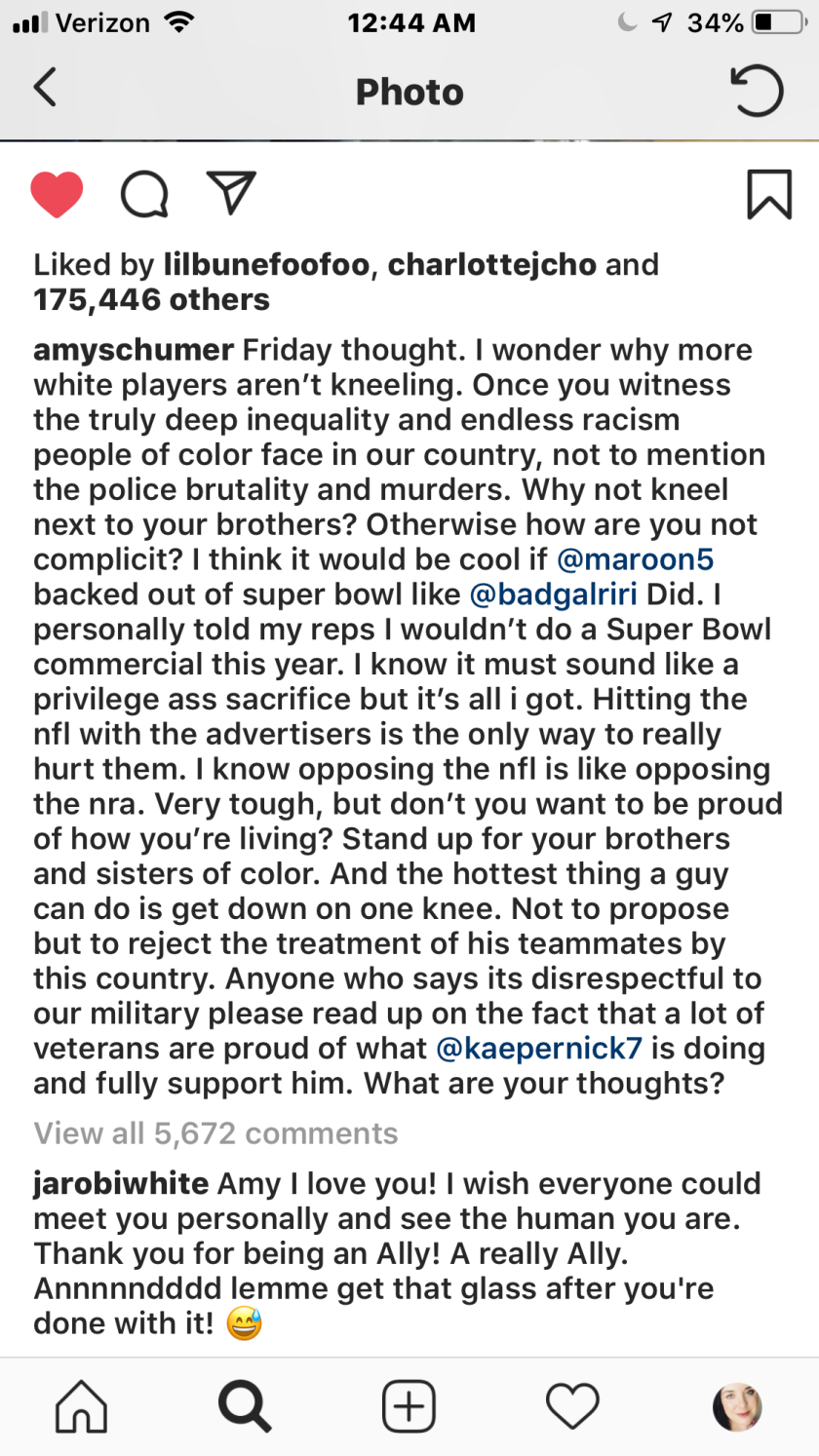 As a self-proclaimed “basic bitch” (it’s a joke due to the fact that if I had blonde hair, a scarf, a Starbucks Frappuccino and some Ugg boots – I can easily slip in and out of the most conservative white circles. I actually have been entitled to do this my whole life on a regular basis with no realization of what a privelage that truly is.), I honestly didn’t understand my white privelage until all of this protest about the Kavanaugh debate on Instagram. I have been asking my friends of color for awhile how I can help and they always told me that to be an advocate, I only must speak up when others are not there to advocate for themselves. I have always lived by that rule and NEVER let racist comments go by without acknowledgement, even if it’s “JUST A JOKE” by someone white who “is not racist.” As a sexual assault victim and someone who has struggled with PTSD and mental health, I don’t know what it means to be a person of color. I can EMPATHIZE (ie. Have empathy) with being stigmatized by hurtful words that are often used willy nilly as a “joke” due to being “crazy” , “bipolar”, or “ a complete nutcase.”

There are many communities right now screaming at the top of their lungs! Telling the world that they hurt… that they are tired and stressed and traumatized by seeing the violence. I may not fully know what it feels like to be black, but I AM trying to. I promise my friends of color that I may be your basic bitch white friend, but I’m here for you and I want to help. I’m a chameleon like the gorgeous and absolutely hilarious female comdedians – @amyschumer and @sarahkatesilverman. The way they’ve been open about their own dumbass white girl behavior and opened up to the nation about how ALL of us white people have said and done stupid shit at some point in our lives. We aren’t racist. We are allies, but we need to show up and put our vote where our mouth is. No more, “Namaste”, all natural, gmo free hippie white girl bullshit with no real action due to complacency and white privelage. Not voting IS a privelage and it’s mainly white women who are putting up their middle finger at the thousands of female suffragettes who fought HARD for our right as women to vote. Let’s not go backwards. Please America. VOTE IF YOU ARE A TRUE SISTER!!!!! #BLUETIDE

I explore The Mind-Body-Soul Connection through Art, Self Love and Creative Expression. My blogging began in 2018 with an interest in Korean skin care and culture. (Hence, my intentional misspelling of the English word "soul" as "Seoul", the capital of South Korea. ) Follow me on IG - @geena.xo View all posts by G. NA